The WIRE grew in 2017, and added more ways to educate policymakers and the community about the needs and risks women face returning from incarceration. Furthermore, The WIRE was very excited to see that our very own Women of The WIRE Program Director, Tanisha Murden, was appointed as Co-Chairman on DC’s Commission on Reentry and Returning Citizen Affairs in May 2017. She has served as a critical voice on the Commission on behalf of all women returning from incarceration.

The WIRE participated or coordinated four discussions between January to December 2017. Specific details about each event are as follows:

In addition to increasing outreach through panel discussions, Cheleta Tucson, one of the Women of The WIRE, testified in February 2017 before a hearing entitled, “Sentencing in the District of. Columbia: Agency Roles and Responsibilities,” held by DC Councilmember Charles Allen, Chairperson of the Committee on the Judiciary and Public Safety. Cheleta’s testimony specifically focused on the media’s negative propaganda as it relates to the Youth Rehabilitation Act’s (YRA) sentencing for young adult women and girls. Archived video of the hearing and Cheleta’s testimony can be found online here.

December 2017 was a joyous month, as The WIRE was able to strengthen its’ family reunification initiative by hosting a holiday party for children with incarcerated mothers and facilitating a fieldtrip to the Nationals’ Winterfest with children of incarcerated mothers. The holiday party was a major success and really drove home our mission to provide peer support for each other and our families. The holiday party brought together several families and children of incarcerated mothers for a day of face painting, meeting superheroes, free ice cream, and – the best part – gifts from Santa Claus!! A heartfelt and sincere thank you to all the organizations who donated their time and products for this momentous occasion. 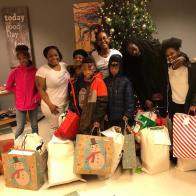 The fieldtrip to the Nationals’ Winterfest brought together seven children for a day full of fun. Women of The WIRE chaperoned the children to get free face painting, meet Santa Claus, play baseball, ride down slides, and meet some of the Nationals players and coaches. 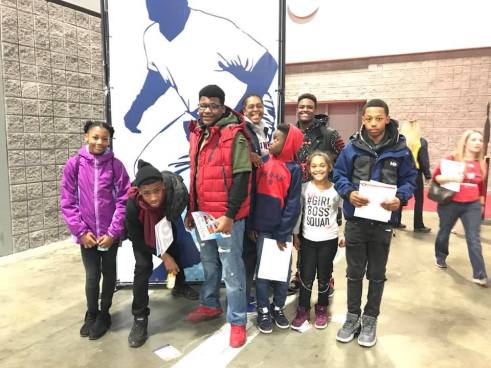 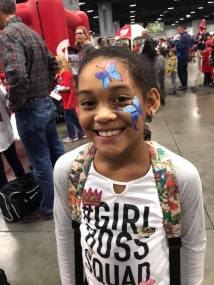 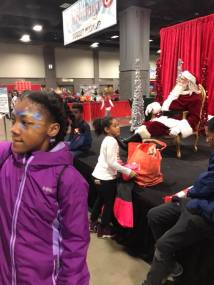 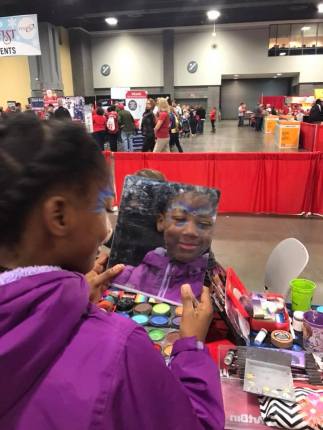 Finally, between October to December, The WIRE was very excited to host its first two fundraising events in an effort to increase community support for all the work we do. We look forward to hosting even more fundraising events in the future to be able to make a bigger impact and help our women returning back to society!

The WIRE had a great year increasing awareness about the challenges women face returning from incarceration, and expanded our outreach beyond the DMV area!

Following a year after the ‘Ban the Box’ legislation, Women of The WIRE facilitated a workshop and panel discussion and spoke at a national rally on behalf of formerly incarcerated women. Women of The WIRE Member, Theresa Johnson-Thompson, collaborated with Georgetown University students to create a video about the legislation and raise awareness.

In June 2015, The WIRE collaborated with DC’s Mayor’s Office on Returning Citizen Affairs (MORCA) and the Howard University School of Law to host the 2nd Annual Female Reentry Leadership Conference.

The WIRE continued to expand our outreach and participated in the “Free Her” Conference in Boston, Massachusetts with national advocates to discuss gender-responsive criminal justice reform.

Women of The Wire Member, Joice Russell, spoke with NBC about the benefits of President Obama’s pilot program to reinstate the Federal Pell Grant.

For our family reunification efforts, we were very excited to raise enough funds from our community to fly a child in DC to Texas to visit his mother two days before his high school graduation. It was a moment the family will never forget – and one The WIRE will forever cherish.

In January 2013, a group of female returning citizens participated in the Community Justice Advisory Network (CJAN) meeting at the Sixth District Police Department to share their experiences with the criminal justice system and the reentry process. That meeting of the minds translated into the development of The WIRE – Women Involved in Reentry Efforts. As momentum continued to grow, The WIRE held its’ first focus group in June 2013 with the DC Mayor’s Office on Returning Citizen Affairs (MORCA).

Quickly following the focus group, The WIRE began forming its’ support network. Between August to October 2013, The WIRE coordinated three separate outreach events to incarcerated women who were preparing for reentry. In August 2013, The WIRE visited women preparing for release from the Bureau of Prison’s (BOP) Secure Female Facility (SFF) Hazelton in Bruceton Mills, WV and shared reentry resources and personal experiences. The WIRE continued these efforts in September 2013 by speaking to women in the Fairview Halfway House in Washington, DC to discuss strategies for a successful reintegration back into society. The Women of the WIRE were also able to visit women in the Jessup Maryland Correctional institution (MCI) to provide information and peer support as they prepare for the reentry process.

In October 2013, The WIRE also facilitated a panel discussion with practitioners in community organizations who work with female returning citizens to raise awareness about the gender-specific concerns women face when they are released from incarceration.

Finally, The WIRE was able to end its’ incredible first year by eliminating barriers to family reunification. In November 2013, The WIRE successfully organized a family reunification trip to SFF Hazelton in support of National Children’s Day, taking over 20 children to visit their mothers around the holidays.